The best of faces: good boys when they're asleep
(eMusic) 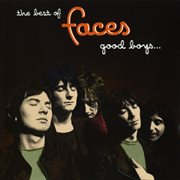 Description
Twenty years after their breakup, the Faces remained one of the most beloved bands in rock history, but it wasn't until 1999 that they were rewarded with a genuine collection, one that worked as an introduction while satisfying the dedicated with a truly listenable, terrific album. Not that the 19-track Good Boys When They're Asleep: Best of Faces contains everything worthwhile from the band -- the absence of the extraordinary live version of Paul McCartney's "Maybe I'm Amazed" is the most egregious omission, and there are a number of remarkable songs missing as well -- but it's hard to quibble with anything that is here. As a matter of fact, listening to Good Boys When They're Asleep is quite a thrilling ride, since it emphasizes their two sides -- the rowdy, party-addled rockers and the melancholy ballads. Collectors will be happy to have the previously unreleased "Open to Ideas," along with the non-LP selections "Pool Hall Richard" and "You Can Make Me Dance, Sing or Anything," but the real news about the disc is that it offers a genuine retrospective that's every bit as good as the band itself, while arguably being a better, more cohesive record than any of the original albums. For longtime fans, as well as neophytes who have read about the Faces but never dived into the records, it's an album that's worth the wait. ~ Stephen Thomas Erlewine
Also in This Series

Note! Citation formats are based on standards as of July 2010. Citations contain only title, author, edition, publisher, and year published. Citations should be used as a guideline and should be double checked for accuracy.
Staff View
Grouped Work ID:
372f414a-53dd-a0a4-e528-ddf6e6131231
Go To GroupedWork