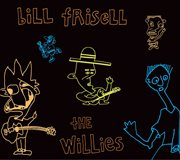 Description
Echoing his 1995 release, Nashville, Bill Frisell's The Willies revisits the auburn sounds of American roots music. Although he has dipped into folk music in prior efforts, these songs follow the traditional mode even more faithfully than any of his previous releases, with only minor shifts into his familiar dissonant explorations. Assisted by Danny Barnes (Bad Livers) on banjo and guitar and bassist Keith Lowe (Fiona Apple, Wayne Horvitz & Zony Mash), Frisell's quirky tonalities and sweeping soundscapes still pervade each track, but the disquieting surges found on releases like The Bill Frisell Quartet and Gone, Just Like a Train are relatively reigned in. This in no way means that The Willies sounds anything like Hot Rize or New Grass Revival -- it is most certainly a Bill Frisell album; dark and mysterious, eerily beautiful, richly textured and layered -- just sort of a kinder, gentler Bill Frisell album. Highlights include the banjo-driven Carter Family standard "Single Girl, Married Girl" and the group's stark rendition of "Sugar Baby," a song usually associated with the similarly haunting Dock Boggs. Anyone familiar with the guitarist's style will understand his choices in recording these timeworn love songs and murder ballads, and traditional folk aficionados will be intrigued to hear their old favorites in this new environment. ~ Zac Johnson
Also in This Series

Note! Citation formats are based on standards as of July 2010. Citations contain only title, author, edition, publisher, and year published. Citations should be used as a guideline and should be double checked for accuracy.
Staff View
Grouped Work ID:
65974fbd-8359-6ea8-337d-d23b839607f9
Go To GroupedWork