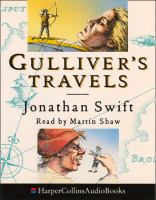 Swift's scornful satire, written "to vex the world rather than divert it", takes a caustic look at those most contemporary concerns irrational prejudice, social inequality, ivory tower elitism and the correct way to open a boiled egg.

'I cannot but conclude the bulk of your natives to be the most pernicious race of little odious vermin that nature ever suffered to crawl upon the surface of the earth.'

Shipwrecked on the high seas, Lemuel Gulliver finds himself washed up on the strange island of Lilliput, a land inhabited by quarrelsome miniature people. On his travels he continues to meet others who force him to reflect on human behaviour - the giants of Brobdingnag, the Houyhnhnms and the Yahoos. In this scathing satire on the politics and morals of the 18th Century, Swift's condemnation of society and its institutions still resonates today.

Note! Citation formats are based on standards as of July 2010. Citations contain only title, author, edition, publisher, and year published. Citations should be used as a guideline and should be double checked for accuracy.
Staff View
Grouped Work ID:
afb5b165-3557-1f62-e65e-d306605ec5a4
Go To GroupedWork