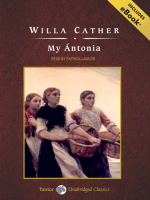 Description
After the death of his parents, Jim Burden is sent to live with his grandparents on the Nebraska plains. By chance, on that same train is Ántonia, a bright-eyed girl who will become his neighbor and lifelong friend. Her family has emigrated from Bohemia to start a new life farming but soon lose their money and must work hard just to survive. Through it all, Ántonia retains her natural pride and free spirit. Jim's grandparents have a large and tidy farm. They are kind to him, but conventional. Later, Jim becomes a scholar and Ántonia becomes a "hired girl" in town. She blossoms in the new freedom that town life offers. Jim can only taste this life vicariously through her recounting of town gossip and of the "dance tent." Ántonia's strong will, spirit, and honesty allow her to thrive in the midst of hardship. In My Ántonia, Willa Cather paints a rich picture of life on the prairie at the beginning of the twentieth century and depicts some of the many cultures that came to compose the United States.
Also in This Series

Formats
OverDrive MP3 Audiobook
Works on MP3 Players, PCs, and Macs. Some mobile devices may require an application to be installed.
Sample Sample
OverDrive Listen
Sample Sample
Need Help?
If you are having problem transferring a title to your device, please fill out this support form or visit the library so we can help you to use our eBooks and eAudio Books.
More Like This