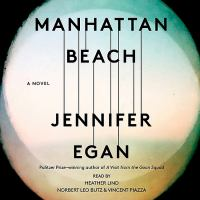 LONGLISTED for the NATIONAL BOOK AWARD FOR FICTION The daring and magnificent novel from the Pulitzer Prize-winning author of A Visit from the Goon Squad. "Immensely satisfyingan old-fashioned page-turner, tweaked by this witty and sophisticated writerEgan is masterly at displaying masteryshe works a formidable kind of magic." -Dwight Garner, The New York Times "Dares to satisfy us in a way that stories of an earlier age used to." -Ron Charles, The Washington Post "Egan's prose is transparent and elegantBut the chief joy of reading Manhattan Beach lies in diving under the surface pleasures of the plot (which are plentiful-it's immersive and compelling), and sinking slowly to its dark and unknowable depths. There are deep truths there." -Vox "ExcellentManhattan Beach is a fleet, sinuous epic, abounding with evocative details and felicitous metaphors[it] magnificently captures the country on the brink of triumph and triumphalism." -Bookforum "Egan's first foray into historical fiction makes you forget you're reading historical fiction at all." -Elle Anna Kerrigan, nearly twelve years old, accompanies her father to visit Dexter Styles, a man who, she gleans, is crucial to the survival of her father and her family. She is mesmerized by the sea beyond the house and by some charged mystery between the two men. Years later, her father has disappeared and the country is at war. Anna works at the Brooklyn Naval Yard, where women are allowed to hold jobs that once belonged to men, now soldiers abroad. She becomes the first female diver, the most dangerous and exclusive of occupations, repairing the ships that will help America win the war. One evening at a nightclub, she meets Dexter Styles again, and begins to understand the complexity of her father's life, the reasons he might have vanished. With the atmosphere of a noir thriller, Egan's first historical novel follows Anna and Styles into a world populated by gangsters, sailors, divers, bankers, and union men. Manhattan Beach is a deft, dazzling, propulsive exploration of a transformative moment in the lives and identities of women and men, of America and the world. It is a magnificent novel by the author of A Visit from the Goon Squad, one of the great writers of our time.

Note! Citation formats are based on standards as of July 2010. Citations contain only title, author, edition, publisher, and year published. Citations should be used as a guideline and should be double checked for accuracy.
Staff View
Grouped Work ID:
5b796a41-1043-2b77-b7cb-890f9127bd41
Go To GroupedWork