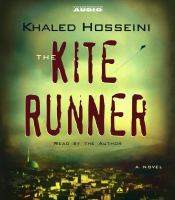 Description
A Stunning Novel of Hope and RedemptionTaking us from Afghanistan in the final days of the monarchy to the present,The Kite Runneris the unforgettable and beautifully told story of the friendship between two boys growing up in Kabul. Raised in the same household and sharing the same wet nurse, Amir and Hassan grow up in different worlds: Amir is the son of a prominent and wealthy man, while Hassan, the son of Amir's father's servant, is a Hazara -- a shunned ethnic minority. Their intertwined lives, and their fates, reflect the eventual tragedy of the world around them. When Amir and his father flee the country for a new life in California, Amir thinks that he has escaped his past. And yet he cannot leave the memory of Hassan behind him.The Kite Runneris a novel about friendship and betrayal, and about the price of loyalty. It is about the bonds between fathers and sons, and the power of fathers over sons -- their love, their sacrifices, and their lies. Written against a backdrop of history that has not been told in fiction before,The Kite Runnerdescribes the rich culture and beauty of a land in the process of being destroyed. But through the devastation, Khaled Hosseini offers hope: through the novel's faith in the power of reading and storytelling, and in the possibilities he shows us for redemption.
Also in This Series

Note! Citation formats are based on standards as of July 2010. Citations contain only title, author, edition, publisher, and year published. Citations should be used as a guideline and should be double checked for accuracy.
Staff View
Grouped Work ID:
4e3420a4-ea12-8e7c-8d92-6b5ffb505241
Go To GroupedWork