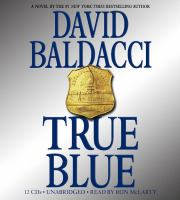 Mason Perry goes by Mace. She's the younger sister of the chief of police of DC, Beth Perry. Mace was a cop and then a detective working narcotics-until she was kidnapped, and set-up by her abductors to look like a criminal herself. She lost her job, her house, and finally her liberty. She served her time in a West Virginia prison, and began the long struggle to turn her life around.

Back on the outside, Mace tries to find work, but with her criminal record, it's tough going. She runs through a string of jobs and won't accept any help from Beth, who is in a politically delicate situation. Finally, she finds a job with Joshua Altman, a reclusive scientist who wants her to help with his research and also act as his de facto bodyguard. As she starts to learn about the true nature of his work, his need for security quickly becomes clear. Altman has made a discovery that portends nothing less than an almost certain apocalypse for the civilized world. But, at the same time, his research holds the key to avoiding this disaster.

Now, Altman has gone missing. He had feared the worst was coming, and he trusted no one, except Mace. To protect his research-and, potentially, the fate of the civilized world -he has hidden his work. But he has left clues behind-clues that only Mace can track. As evil forces close in on her, Mace's only hope to save herself is to follow this deadly treasure hunt to the end.

Note! Citation formats are based on standards as of July 2010. Citations contain only title, author, edition, publisher, and year published. Citations should be used as a guideline and should be double checked for accuracy.
Staff View
Grouped Work ID:
d21b092d-db8a-d257-3c7b-6545d63960a9
Go To GroupedWork