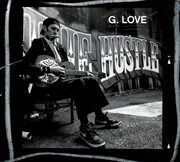 Description
For fans of G. Love's early-'90s output, it was frustrating to watch his wiry, organic hybrid of hip-hop, blues licks, and kind bud groove fail to resonate with the followings of fellow travelers like the Dave Matthews Band and Ben Harper. Sure, "Cold Beverage" made the mixtape rounds, but where was the love? And yet, as the '90s played out, it was G. Love's own inconsistencies that began to hurt him. The scatterbrained Electric Mile from 2001 was the final straw -- if people had always had a hard time classifying him, suddenly it seemed like the man himself couldn't figure it out. That's all changed with Hustle. He works with his usual Special Sauce unit of bassist Jimmy Prescott and drummer Jeffrey Clemens, but adds Money Mark, percussionist Danny Frankel, and producer Mario Caldato, Jr., as well as old pal Jack Johnson, whose Brushfire Records provides the platform for this easygoing hustle. Johnson appeared on G.'s "Rodeo Clowns" way back when; it seems he's determined to bring his pal a bit of his newfound mainstream lovin'. It helps that Hustle is G. Love's best collection of songs in a long, long time. Kicking off with the loopy, gritty swing of "Astronaut" and running through the shameless yet somehow effective bump of "Booty Call," the album keeps things nice and simple, with G. Love's trademark smirky flow, stripped-down rhythms, and distinctive bass and guitar licks over the top. "Love" is a sunny, upbeat ode with a slight CSN lilt, while the title track hits up cool Philly soul for its laconic sneak. "Loving Me" is a quietly acoustic, near folk number, and "Waiting" turns on an easily surging bassline suggestive of vintage Sublime. G. Love is still restless. He likes playing the bluesman troubadour role, but can't work it without a little bit of rapping. He's also a heartfelt acoustic balladeer, but never says no to an elbowy, hippy dance-ready, double entendre-filled groover like "Fishing Song" ("All the fishes love me/They all wanna jump on the end of my line..."). Hustle rolls through these varieties with strong playing and tall servings of G.'s sly wit. It has a succinct ease that'll be familiar to fans of Johnson's albums, and harks refreshingly back to the G. Love & Special Sauce of old. Yeah, it really is that easy. ~ Johnny Loftus
Also in This Series

Note! Citation formats are based on standards as of July 2010. Citations contain only title, author, edition, publisher, and year published. Citations should be used as a guideline and should be double checked for accuracy.
Staff View
Grouped Work ID:
58d42c94-6725-00f5-f51a-e6a2dcf5cf0b
Go To GroupedWork