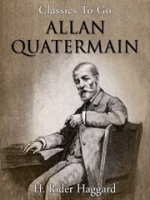 Description
Sir Henry Rider Haggard was an English writer of adventure novels set in exotic locations, predominantly Africa, and the creator of the Lost World literary genre. His stories, situated at the lighter end of the scale of Victorian literature, continue to be popular and influential. He was also involved in agricultural reform and improvement in the British Empire. Haggard wrote the book over his summer holiday in 1885 immediately after King Solomon's Mines. At the beginning, Allan Quatermain has lost his only son and longs to get back into the wilderness. Having persuaded Sir Henry Curtis, Captain John Good, and the Zulu chief Umslopogaas to accompany him, they set out from the coast of east Africa into the territory of the Maasai. While staying with a Scottish missionary, Mr. Mackenzie, they are attacked by a Maasai group, whom they overcome heroically. They travel by canoe along an underground river to a lake (which turns out to be the sacred lake of Zu-Vendis) in the kingdom of Zu-Vendis beyond a range of mountains. The Zu-Vendi are a warlike race of white-skinned people isolated from other African races; their capital is called Milosis. At the time of the British party's arrival, they are ruled jointly by two sisters, Nyleptha and Sorais. The priests of the Zu-Vendi religion are hostile to the explorers as they had killed hippopotamuses -- animals sacred to the Zu-Vendis -- on their arrival, but the queens protect them. (Excerpt from Wikipedia)
Also in This Series

Note! Citation formats are based on standards as of July 2010. Citations contain only title, author, edition, publisher, and year published. Citations should be used as a guideline and should be double checked for accuracy.
Staff View
Grouped Work ID:
8e047c02-ad4f-e972-adba-80b1e40629f4
Go To GroupedWork