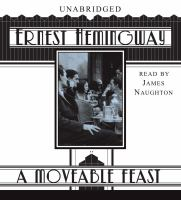 Description
"If you are lucky enough to have lived in Paris as a young man, then wherever you go for the rest of your life, it stays with you, for Paris is a moveable feast." --E RNEST H EMINGWAY TO A FRIEND, 1950Published posthumously in 1964,A Moveable Feastremains one of Ernest Hemingway's most beloved works. It is his classic memoir of Paris in the 1920s, filled with irreverent portraits of other expatriate luminaries such as F. Scott Fitzgerald and Gertrude Stein; tender memories of his first wife, Hadley; and insightful recollections of his own early experiments with his craft. It is a literary feast, brilliantly evoking the exuberant mood of Paris after World War I and the youthful spirit, unbridled creativity, and unquenchable enthusiasm that Hemingway himself epitomized.Ernest Hemingway did more to change the style of English prose than any other writer in the twentieth century, and for his efforts he was awarded the Nobel Prize for literature in 1954. Hemingway wrote in short, declarative sentences and was known for his tough, terse prose. Publication ofThe Sun Also RisesandA Farewell to Armsimmediately established Ernest Hemingway as one of the greatest literary lights of the twentieth century. As part of the expatriate community in 1920s Paris, the former journalist and World War I ambulance driver began a career that lead to international fame. Hemingway was an aficionado of bullfighting and big-game hunting, and his main protagonists were always men and women of courage and conviction, who suffered unseen scars, both physical and emotional. He covered the Spanish Civil War, portraying it in fiction in his brilliant novelFor Whom the Bell Tolls, and he subsequently covered World War II. His classic novellaThe Old Man and the Seawon the Pulitzer Prize in 1953. He died in 1961.
Also in This Series

Note! Citation formats are based on standards as of July 2010. Citations contain only title, author, edition, publisher, and year published. Citations should be used as a guideline and should be double checked for accuracy.
Staff View
Grouped Work ID:
b23c18ee-8524-9981-0988-2bf656a7e96c
Go To GroupedWork