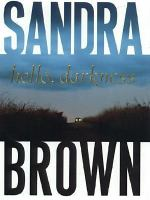 Description
Bestselling author Sandra Brown is the master of the knife-edge thriller. Her latest and most powerful novel to date, Hello, Darkness, is the gripping story of a woman haunted by her past and caught in a nightmare that threatens to destroy her future. It's a brilliant, fast-paced tale, electric with sexual tension, by one of America's most popular authors of sophisticated suspense. For Paris Gibson, her popular late-night radio show is both an escape and her one real contact with the outside world. Since moving to Austin to ease the pain of past, tragic mistakes, she has led a life of virtual solitude, coming alive only when she hosts her show. To her loyal listeners, she is a wise and trusted friend who not only takes their music requests but listens to their problems and occasionally dispenses advice. Paris's world of isolation is brutally threatened, however, when one listener - a man who identifies himself only as "Valentino" - tells her that her on-air advice to the girl he loves has caused her to leave him and that now he intends to exact his revenge. First he plans to kill the girl, whom he has abducted - which he says he will do in 72 hours - then he will come after Paris. Joined by the Austin police department, Paris plunges into a race against time in an effort to find Valentino before he can carry out his threat to kill - and to kill again. To her dismay, she finds that one of the people she must work with is crime psychologist Dean Malloy, a man with whom she shares a history that had a catastrophic effect on both their lives. His presence arouses old passions, forcing Paris to confront painful memories that she had come to Austin to forget. As the clock ticks down, and Valentino's threats come closer and closer to becoming a reality, Paris suddenly finds herself forced to deal with a killer who may not be a stranger at all. Tense and compelling right up to the chilling climax, Hello, Darkness is suspense at its very best, by the author USA Today has called "a masterful storyteller, carefully crafting tales that keep readers on the edge of their seats."
Also in This Series

Note! Citation formats are based on standards as of July 2010. Citations contain only title, author, edition, publisher, and year published. Citations should be used as a guideline and should be double checked for accuracy.
Staff View
Grouped Work ID:
48013230-4d0d-1de0-2481-b52c7d332b87
Go To GroupedWork