A farewell to arms
(CD Audiobook) 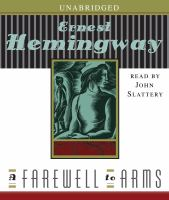 Description
Hemingway's classic novel of the First World WarThe best American novel to emerge from World War I,A Farewell to Armsis the unforgettable story of an American ambulance driver on the Italian front and his passion for a beautiful English nurse. Hemingway's frank portrayal of the love between Lieutenant Henry and Catherine Barkley, caught in the inexorable sweep of war, glows with an intensity unrivaled in modern literature, while his description of the German attack on Caporetto -- of lines of fired men marching in the rain, hungry, weary, and demoralized -- is one of the greatest moments in literary history. A story of love and pain, of loyalty and desertion,A Farewell to Arms,written when he was 30 years old, represents a new romanticism for Hemingway.Ernest Hemingwaydid more to change the style of English prose than any other writer in the twentieth century, and for his efforts he was awarded the Nobel Prize for literature in 1954. Hemingway wrote in short, declarative sentences and was known for his tough, terse prose. Publication ofThe Sun Also RisesandA Farewell to Armsimmediately established Ernest Hemingway as one of the greatest literary lights of the twentieth century. As part of the expatriate community in 1920s Paris, the former journalist and World War I ambulance driver began a career that lead to international fame. Hemingway was an aficionado of bullfighting and big-game hunting, and his main protagonists were always men and women of courage and conviction, who suffered unseen scars, both physical and emotional. He covered the Spanish Civil War, portraying it in fiction in his brilliant novelFor Whom the Bell Tolls,and he subsequently covered World War II. His classic novellaThe Old Man and the Seawon the Pulitzer Prize in 1953. He died in 1961.
Also in This Series

Note! Citation formats are based on standards as of July 2010. Citations contain only title, author, edition, publisher, and year published. Citations should be used as a guideline and should be double checked for accuracy.
Staff View
Grouped Work ID:
c7ba290d-04a7-7e3e-0c6b-9dc4ee6f976f
Go To GroupedWork