Our kind of traitor
(CD Audiobook) 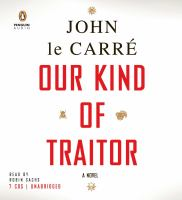 Description
Unabridged, 7 CDs, 9 hours Chosen as a Best Book of the Year by the  The Washington Post, Publishers Weekly,  and  Kirkus Reviews In this exquisitely told novel, John le Carré shows us once again his acute understanding of the world we live in and where power really lies.   In the wake of the collapse of Lehman Brothers and with Britain on the brink of economic ruin, a young English couple takes a vacation in Antigua. There they meet Dima, a Russian who styles himself the world's Number One money-launderer and who wants, among other things, a game of tennis. Back in London, the couple is subjected to an interrogation by the British Secret service who also need their help. Their acquiescence will lead them on a precarious journey through Paris to a safe house in Switzerland, helpless pawns in a game of nations that reveals the unholy alliances between the Russian mafia, the City of London, the government and the competing factions of the British Secret Service.   .
Also in This Series

General Note
Compact discs.
Participants/Performers
Read by Robin Sachs.
Description
Perry and Gail are very much in love when they splurge on a tennis vacation at a posh beach resort in Antigua. But the charm begins to pall when a big-time Russian money launderer enlists their help to defect. In exchange for amnesty, Dima is ready to rat out his compatriots and expose corruption throughout the financial and political worlds. Soon, Perry and Gail find themselves a deadly endgame.
Similar Series From NoveList
Similar Titles From NoveList
Similar Authors From NoveList
Borrower Reviews
Editorial Reviews
Published Reviews
Reviews from GoodReads
Loading GoodReads Reviews.
Citations
APA Citation (style guide)

Note! Citation formats are based on standards as of July 2010. Citations contain only title, author, edition, publisher, and year published. Citations should be used as a guideline and should be double checked for accuracy.
Staff View
Grouped Work ID:
3318926f-4eba-0c5a-8399-f205bfb82587
Go To GroupedWork