Catalog Things you save in a fire / »  CD Audiobook »

Things you save in a fire
(CD Audiobook) 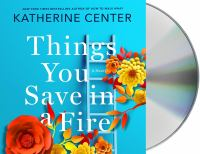 "In this charming listen, narrator Therese Plummer portrays Cassie Hanwell--a confident, talented firefighter whose solitary life is upended when her estranged mother asks her to relocate to Boston...A wonderful story of forgiveness, friendship, love, and hope." -- AudioFile From the New York Times bestselling author of How to Walk Away comes a stunning new audiobook about courage, hope, and learning to love against all odds.

Cassie Hanwell was born for emergencies. As one of the only female firefighters in her Texas firehouse, she's seen her fair share of them, and she's a total pro at other people's tragedies. But when her estranged and ailing mother asks her to give up her whole life and move to Boston, Cassie suddenly has an emergency of her own.

The tough, old-school Boston firehouse is as different from Cassie's old job as it could possibly be. Hazing, a lack of funding, and poor facilities mean that the firemen aren't exactly thrilled to have a "lady" on the crew--even one as competent and smart as Cassie. Except for the infatuation-inspiring rookie, who doesn't seem to mind having Cassie around. But she can't think about that. Because love is girly, and it's not her thing. And don't forget the advice her old captain gave her: Never date firefighters. Cassie can feel her resolve slipping...and it means risking it all--the only job she's ever loved, and the hero she's worked like hell to become.

Katherine Center's Things You Save in a Fire is a heartfelt and healing tour-de-force about the strength of vulnerability, the nourishing magic of forgiveness, and the life-changing power of defining courage, at last, for yourself.

Praise for Things You Save in a Fire:

"Oh, how I love Katherine Center's writing...and her newest novel is a gem...a story that reminds us that the word emergency has, at its heart, a new beginning. Just read it, and thank me later." - Jodi Picoult, New York Times bestselling author

"...a sharp and witty exploration of love and forgiveness that is at once insightful, entertaining, and thoroughly addictive." - Kirkus, starred review

Center, Katherine and Thérèse, Plummer. 2019. Things You Save in a Fire. New York, NY: Macmillan Audio.

Center, Katherine and Thérèse, Plummer, Things You Save in a Fire. New York, NY: Macmillan Audio, 2019.

Note! Citation formats are based on standards as of July 2010. Citations contain only title, author, edition, publisher, and year published. Citations should be used as a guideline and should be double checked for accuracy.
Staff View
Grouped Work ID:
b7316e45-1073-0c65-c312-a1ff3bb8d35c
Go To GroupedWork